Now for some real torture. Forget the Exmess pudding. You can drink it. It’s called Chambers Rosewood Vineyards Rutherglen Rare Muscat ($350-$400 for .375 ml., 18% alcohol; screw cap). It’ll change your brain forever. It’s prickly to sniff: spicy and packed with all that rich fruit mince and suet and whatnot that grannie would pack in her steamy pud. It’s dangerously fluffy of texture, never cloying, and its impossibly dense royal fruit is balanced perfectly by staunch natural acidity.

From a solera commenced by the Chambers family in the 1890s, this is quite simply a mouthful of the history of Australian winemaking. It’ll make you go all runny in the middle. Exquisite!

The influential US wine critic Robert Parker gave two of Chambers Rutherglen wines 100 out of 100 in 2001 and included Chambers as one of only seven Australian wineries in his book The World’s Greatest Wine Estates. Describing them as “nothing less than national treasures” and “some of the world’s most remarkable dessert wines”.

I was in Melbourne and thought Bill Chambers would be an interesting bloke to meet, as did a number of other readers. He’s high up on the list of suggestions. So I arranged a meeting.

Didn’t really look at the map and set out from the Yarra Valley after seeing James Halliday early on Thursday evening. Quite a drive, it’s half the way from Melbourne to Sydney and I had to be back in Adelaide Saturday afternoon.

Bill’s been described as “the undisputed king of the fortified wine business”. Bill and his son Stephen, head winemaker at the Chambers Rosewood since 2001 . Photo : supplied.

How did you get involved with wine ?

My family have grown grapes and made wine at Rutherglen since the early 1860s.

The family originally came from Norfolk county in England. They had been interested in wine for many years, they spent time over in France and probably got an interest in vines over there.

My father decided that as I was his eldest son, I should inherit my grandfather’s farm and cellars. Dick Buller, our next door neighbour, was sent to Roseworthy Agricultural College and had returned to Rutherglen after doing the oenology course with  Mr Hickinbotham. Roseworthy College : Image supplied by The University of Adelaide.

My father was impressed with Dick’s winemaking skills so I was sent to Roseworthy in 1950 to do the diploma of oenology.

Did you have an interest in wine as a young man ?

No none at all. During the School holidays my six brothers and I, spent some time in the vines but it was only after I started the wine course that I became passionate about wine.

Grandfather didn’t know much about winemaking and so he thought I should go on and learn it.

Roseworthy was a wonderful place. John Vickery was in my year. We had to do a vintage somewhere each year – I did my first at Seppelts and the second was at Lindemanns. I was a bit more useful then because I knew a bit more. After Roseworthy I was planning to work in Mildura but ended up working in Clare.

I came back to Rutherglen after spending 4 years at Clare working for Stanley Wine Company owned by the Knappsteins. My grandfather died in 1956 and my father had cancer. I made the wine at St Leonards in ’59 with the help of Harold Cofield who was foreman there. During the next year my father hired a cooper to fix up the casks at Rosewood which had been empty for 10 or 12 years.

The old Chambers Rutherglen cellar as it is today. Photo : Milton Wordley

In 1960, with the help of Syd MacMahon, the cellarman, book keeper and general factotum at Rosewood, we were able to get the old machinery and wooden fermenting vats into working order and make the 1960 vintage at Rosewood.

My father died just before vintage. Things were fairly tough, the vines were replanted after Phyloxera in about 1908 and 1917. We were told at Roseworthy the life of a vineyard was about 40 years. A further problem was that probate needed to be paid for a second time after my Grandfather’s death, so I had to make do with the older machinery and casks for many years.

My Mother came and looked after the books and customers, after my father, Syd died in 1961.

Robert Parker has given your rare wines 100 points a couple of times – definite high points ? I did not meet Mr Robert Parker – he did not wish to meet people whose wines he tasted because it might influence the result of his tastings.

It happened because one evening, very late, almost 11 o’clock and I had gone to bed, a very enthusiastic young man who had represented Brown Brothers in England, brought up Mr Chatterton from New York and he tasted the Muscat and Muscadelle.

He liked them very much and wished to buy quite a lot at half the price I had quoted. I said, “You can haggle on the price of the young wines but not on the old stuff – the price is not negotiable”.

So he bought 5 dozen of each and that is how Robert Parker came to taste these wines.

He described them as “decadent” and “hedonistic with an aftertaste lasting 5 or more minutes.” We only reblend the old wines when we have an excellent vintage which occurs only once or twice a decade. Old and rare ‘Exhibition Barrel’ in the Chambers Cellar from 1888 Exhibtion in Melbourne. Photo : Milton Wordley

What it is about this area that produces such distinctive wines ?

Because this is a small area which generally has a long dry autumn and the grapes accumulate high sugar and flavour.

It’s also a pretty hot area. We make our best wine when we get the most rain and its cooler.

I reckon it’s getting hotter every year, not sure if it’s the hole in the ozone layer, but we are definitely seeing some climate change.

What has happened to Australia’s interest in fortified wine?

They are generally more alcoholic than table wines but we do sell them especially Muscat and Muscadelle.

We also make a lower alcohol sweet red and Muscat at 15% and they sell well.

You still make fortifieds here – who is drinking them ?

Mostly older people but if the younger people taste them, they generally buy a bottle. We are planting more Palomino to meet the demand for Dry Flor. 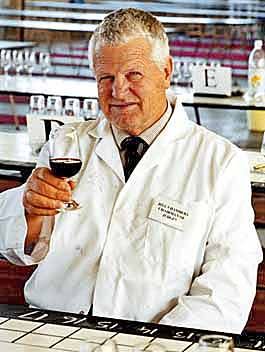 While I was working at Clare I was invited to be a steward at Adelaide in 1957.

In those days I didn’t drink much, unlike a lot of blokes in the industry – particularly the blokes that sold it. I tasted a lot – but I didn’t drink much. So I found the first day of judging difficult – and often felt seedy the next day.

My father used to talk about getting in training for anything and this was no different.

He reckoned there was an enzyme in the liver that built up after a while – he encouraged me to take a whisky a day to keep this enzyme going.

When I got back to Rutherglen in ’58 I was asked to Melbourne Show as an associate judge for 3 years I think 1959, 60 and 61 and then during ’62 I became a judge in Melbourne and shortly afterwards in Adelaide and Sydney.

I enjoyed the shows and judges were very kind and helped and encouraged me.

I became Chairman of Melbourne show in 1980 and retired from judging about 2002.

Any memorable wines along the way ?

I was privileged to taste early Grange Hermitages.

Penfolds were the first to spend serious money on new oak.

I believe that Max also always insisted on buying the best fruit. They were big flavoursome wines that were able to carry the wood.

One night a friend and I looked at a number of 20 year old Granges, Bordeauxs and Burgundies. Grange stood up to them very well.

I also saw while judging, the effects of stainless steel and refrigeration which Colin Gramp had brought from Germany to make Pearl wine.

He revolutionised white wine making in Australia with this equipment. I would hope I could have a good steak with a Domaine de la Romanee Conti or a La Tache but now it probably will be a glass of water and a boiled egg !

No no no ! This story came about  because I love to read poetry.

I enjoy the challenge of both Greek and Latin but it is a hobby and now I have trouble remembering. My mother influenced my love of reading.

Latterly Berek Segan showed me some wonderful European wines that I would never otherwise have tasted.

Not really. The wine industry’s been very good to me.

If you ever had problems there has always been someone to help. It’s looked after me really well.

An English friend told my father, “Never get out of the wine industry – there will always be a demand.”

1 : Here is a link to  Stuart MacGill’s interview with Stephen Chambers  .

2 : I did make it home by mid afternoon on the Saturday, just in time for a tasting of mystery whites with a few friends. We taste wine while our partners are at bookclub, they reckon they read books, we reckon they just talk and drink wine as well. My two mystery wines were anything but white, but they were the  hit of the afternoon.

A few mates and the couple of mystery whites. Photo : Milton Wordley

Michael Brajkovich MW : Adelaide Wine Show
In an interview early this year, when I asked Chris…

Dr Robert DeBellevue M.D. : New Orleans
The year that I photographed ‘A Year in the Life…

Larry McKenna : Escarpment Vineyard
Martinborough’s about an hours drive North of Wellington. I first went…
Disclaimer
The views expressed on this site are those of the respondents, no responsibility is taken for them by the Blog’s publisher.