When I started ‘People of  Wine : Ten Questions’, I always planned to include an occasional post on any wine events I was involved in and/or attended. One such event was the 50 year celebration of the wine bottling club ‘CHURCHWARD’.

Some weeks ago I was invited by the Burnside Library to present a talk on the journey I had creating the Grange Book. Derik Ward an old friend and President of the Churchward wine bottling club, was in the audience and asked if I would like to attend the next bottling. “It’s  just around the corner from where you live,” he said. I could not believe that it was over 30 years since I had last bottled and the club was still going. “Thanks for the invite,” I replied, “love to come”. So off I went, just around the corner, to Don and Lois’s for Bottling No. 334.

Many plastic hoses hung out to dry. 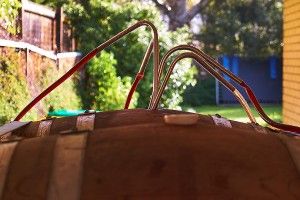 The more the merrier with the filling hoses.

It was a real pleasure to reconnect with so many members, some I had not seen for over 30 years. I was told by the regular bottlers there had never been a Churchward bottling quite like this one.

We bottled and lunched on the pavement of Sturt Street in Adelaide’s CBD. Passers-by and public transport travellers were agog with interest at what was on view in a public area. Needless to say, it was a bottling to remember. Several neighbours joined us for a glass of wine. I’d have to say, having a good knowledge of most Australian capital cities, this could probably only happen in the CBD of Adelaide.

The club is now 50 years old. Derik is and has been for president all this time. At the Sturt St. bottling he invited my partner Anne Marie and I to the club’s 50th year anniversary luncheon at the National Wine Centre.

I believe Churchward is the only club of its kind in Australia. Not a registered club, no annual meetings or election of officers, no constitution and hardly any rules….just a group of friends who meet six times a year to bottle some of Australia’s best red wines. They even bottled a barrel from Bordeaux once. The only requirement for membership is a love of wine.

Churchward may be one of the few male-only clubs I know of, but in today’s politically correct world, the wives/partners are always invited to a number of functions, including the 50th celebratory lunch.

It’s members and partners at some events. Photo Milton Wordley

So how did the club  begin and where did the name come from, you may ask ?

Over dinner one night Derik and a few mates were discussing a magazine article on the merits of home bottling wine. This encouraged Derik and Gill Ward to organise and host the first bottling of Johnston’s Pirramimma red wine one Sunday morning in 1965 at their home in Wayville. After the bottling the bottlers paused to sample a glass or three.

Next door, the congregation of the Methodist Church were leaving, after their Sunday morning service. There were a few disapproving glances at such revelry, especially on a Sunday morning when everyone should be in church. As a result an ‘unknown’ member suggested the club be named Churchward! The club began with 15 members, but this rapidly grew as friends of friends joined.  Derik was the original organiser and accepted the role of president with other founding members occupying other committee roles. Several hundred South Australians have been part of Churchward over the years. There are now about 70 active members.

The club has organised a total of 335 bottlings. Derik reckons at a rough guess this amounts to a total of almost 400,000 litres of wine. Here are a few shots of the 50th anniversary bottling No. 335 at the home of the original hosts Derik and Gill Ward. A very memorable morning it was, even with the rain. The bottling tubes can be a problem. Photo : Milton Wordley

Wines on the day were…. Anniversary Magnum of 2014 Langmeil Shiraz with some of the old labels. Photo : Milton Wordley

Celebration magnums of 2014 Langmeil Shiraz. Sweet and spicy fruit but balanced, with velvety yet youthfully austere tannins. A full-bodied wine showing nice complexity with hints of cedar and vanilla, which in combination flow through the lengthy, pepper and spice finish.

750ml bottles of The Bleasdale 2014 Generations Shiraz. Winemaker Paul Hotker selected only the best parcels of fruit for this intensely flavoured and full-bodied shiraz. Flavours of ripe plums and other dark berries are layered with liquorice, pepper and fresh spices and they marry beautifully with subtle oak nuances, giving a complex wine balanced by smooth round tannins. The current release is the 2010 Generations Shiraz which scored 94 points from James Halliday. 2014 is considered to be a good vintage in Langhorne Creek.

Both are very good wines and well above your average quality for normal home bottling.

Phil Gallagher off to his cellar. Photo : Milton Wordley

John Vickery : Riesling meister.
In her 2003 ‘The Age’ article on Australia’s finest winemakers…
Disclaimer
The views expressed on this site are those of the respondents, no responsibility is taken for them by the Blog’s publisher.